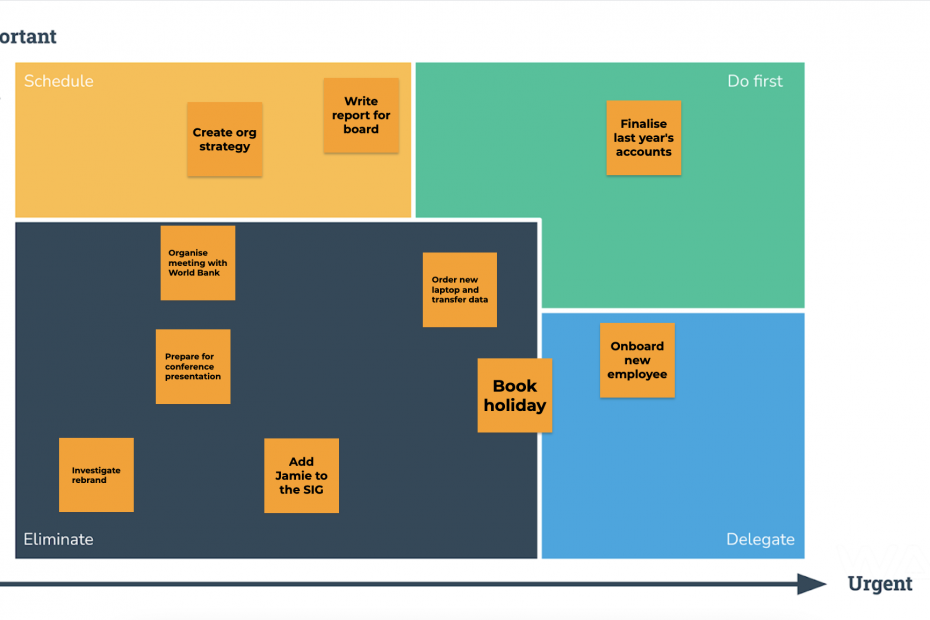 Dwight D. Eisenhower was not only a five-star general in the US Army during WWII, but subsequently served two terms as 34th President of the United States. He was a man who knew time pressure! A quote attributed to Eisenhower is “I have two kinds of problems, the urgent and the important. The urgent are not important, and the important are never urgent.”

​​Based on this is what’s come to be called the ‘Eisenhower Decision Matrix’ (or just ‘Eisenhower Matrix’ for short). This can be a particularly useful tool for figuring out what to do next when things seem a bit overwhelming.

With clients, we make three modifications to the standard Eisenhower Matrix:

Goals: untangle the list of thoughts, ideas & tasks and order them by prioritisation

First of all, populate the orange sticky notes to the right-hand side of the matrix. Try to separate out things into distinct activities (e.g. ‘finalise last year accounts’ and ‘write board report’ are two separate items).

Once you’ve done this, add them onto the grey box, thinking about how urgent and important they are. Don’t allow any to overlap. Please note that this is all relative, so by putting something over to the left or at the bottom, you’re not saying that it doesn’t have urgency or importance. You’re trying to weigh these up against one another.

You should have something similar to the above. Now you can select the background and delete it. You won’t need it any more. This should reveal a colourful new background (which you can’t delete). The first thing you should do is to nudge any sticky notes overlapping white lines firmly into one of the four boxes.

You’ll notice that the ‘Eliminate’ box is much bigger than the other boxes. Here’s why:

It may be that when your tasks are revealed to you in this way you decide that some are actually more important or urgent than you first thought. That’s fine! Move them — this is just a tool to help you think.